Generalities About the Concept of Sustainable Development

The concept of sustainable development appeared when the economic growth was given ecological objectives regarding the prevention and reduction of pollution with a view to environmental preservation, as well as the rehabilitation of affected areas.

The prevention of a destructive process such as the disruption of the ecological balance is by all means cheaper than the reconstitution of the conditions prior to an ecological disaster.

Sustainable development has become the strategical objective of all mankind. United in pursuit of this objective, the governments of many countries elaborated variants of actions which should ensure the economic growth towards which mankind aspires, with minimum damage to the environment.

There were elaborated political and economic solutions, worldwide and region-wide, and so there was born a new discipline, called environmental engineering.

The Purpose of Sustainable Development

The general objective of sustainable development is to find the optimum way of interaction between the technological, economic, environmental and human, which, by means of environmental engineering, should ensure both for the present-day generations and for the future ones living conditions as satisfying as possible.

Therefore sustainable development does not have in view only immediate results, but also the long-term consequences upon the existence on our planet.

Sustainable development offers a solution to the eradication of rampant poverty by creating jobs and ensuring food, water, housing, medical and social assistance.

For the first time there was taken into account the control of demographic growth, lest there should necessary an economic growth inadequate to the degree of environment supportability in optimum conditions.

The ways by which these objectives can be reached are many, but we consider that the technological and economic component is among the most important, as it lead to effects that can be made obvious in the shortest time.

Creating favourable conditions to the promotion of non-conventional technologies, with low pollution risk, encouraging eco-industrial development, levying stimulating taxes for those who contribute in a relevant way to the preservation of the environment are concrete ways by which sustainable development could be achieved.

The geographical, economic, social and cultural differences give rise to different levels of organizing and putting into practice the general measures and reflect their adoption to the locale conditions.

There are highly developed countries which levy punitive ecological taxes for polluting the environment by:

But there are also taxes on the right to pollute a certain area up to a certain level, and any excess overtaxed.

There are also environmental taxes, levied on the population for its contribution to the pollution of the environment, which constitute funds with a view to taking rapid action when the rehabilitation and reconstitution of environmental conditions are deemed necessary.

Within the global strategy of sustainable development, each and every state has its obligations.

The Romanian Legislation on Sustainable Development

The Romanian Parliament passed Law 137/1995 for the protection of the environment, reissued in February 2000, as well as Law 158/1999 concerning the setting up and the functioning of National Council of Environment and Sustainable development, in addition to a great number of order issued by the Parliament and the ministries whose aim was the observance of the legal provisions concerning the reconstitution guarding and maintaining the ecological balance.

The local organizational network checks on the application of the measures envisaged for handling the funds established for ecological development and creates the conditions for increasing the quality of life.

The fact that our country adopted a governmental policy for the protection of the environment in recent years, that there are numerous necessities, which require ample funds are the reason why the implementation of current measures and the actions of environmental rehabilitation are to be spread out on longer periods of time.

The strategy of environmental protection is not restricted only to the above-mentioned aspects. A special importance within this strategy is held by the existence of a legislation which should be in conformity with international standards and applied consistently.

In our country there apply a complex ensemble of juridical norms, elaborated in conformity with environmental law, which regulates the relations between the citizens and the natural and artificial components of the environment and the preservation of the natural and cultural assets in both the rural and urban areas.

The special component of the environment law refers to the legal protection of the soil and subsoil, of the forests, waters, air, fauna, flora. By the new concept of human settlement there are analysed legal ways of protecting the urban environment by documentations on urbanism and territorial planning, the authorization of building in protected areas, the legal regime of quality in constructions, as well as the prevention and fighting sound pollution.

Quality represents the ensemble of features of a certain value that expresses the degree in which it satisfies the social necessity depending on the technological, economic and aesthetic parameters, on the degree of utility and on the economic efficiency.

Quality expresses the ensemble of characteristics of a service which grant it the possibility to satisfy the needs, both explicitly and implicitly. The needs include aspects regarding the capacity of usage, security, availability, economic aspects and environmental aspects. (Cristea, 2002)

The solution to the quality problem can be ensured by applying two types of measures:

In the specialized literature these methods can be found under different names: methods of quality control, devices for controlling quality etc.

The lack of management leads to additional expenses, low productivity and to the production of non-quality which will be sold on the market.

The management of quality includes not only the evaluation and the accreditation, but also all the other activities and mechanisms by which the quality of university education is maintained and developed both inside and outside the educational institution.

The management of quality enables the institution to self evaluate, to improve and to change its performance.

At the European level quality should be promoted by co-operation and by mobility of education.

In order to achieve this purpose, we must:

In figure 1 there is a model for a quality management system based on a process adapted to the university system. (Cristea, 2002) 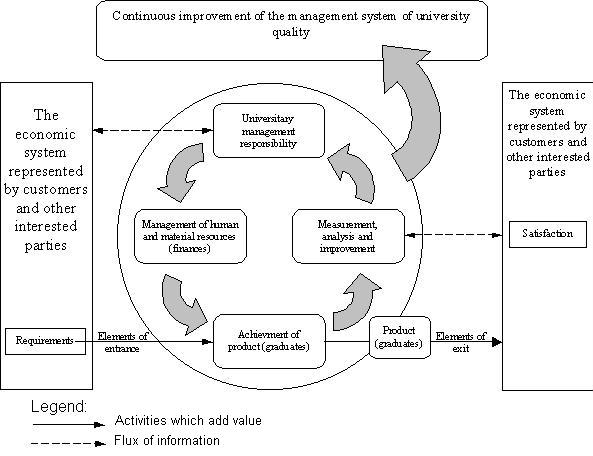 Rationalization and Globalization in Education Process

There is undoubtedly “resistance to globalization“, especially from developing countries, and not only from them. They display such phenomena as marginalization, unfavourable conditions, difficulties in the process of structural adjustment, which – it is very true – generate acute social problems.

Under these circumstances, the amplitude of the phenomenon by which so many regional integrationist groups have appeared arouses numerous questions and calls for answers referring to the hypothesis – frequently set forth in the recent years and taken into consideration by politicians, economists, sociologists, analysts – of a new architecture of the international space, around some “regional blocs”.

The regional integration and co-operation agreements are based both upon the expansion of the geographical area and upon the diversification of the forms of activity and negotiation. We also have to mention the existence of a multitude of factors which are leading to an ever increasing diversity of regional integration forms – at the level of groups, communities or economic associations, depending on: the number of the adhering states, the depth of the orientation towards integration, the predominantly commercial or political character of programs, the degree of institutionalization and transfer of sovereignty etc.

In essence, regional integration creates a favourable framework for the participation of the members of integrationist organisms in the international commercial exchanges and contributes to the acceleration of the reform processes and of macro-stability at a national, subregional and regional level, as well as to the acceleration of foreign investment flows, with beneficial effects upon the efficiency of joint development programs.

The encouragement of the development of the private education which does not require budget funding is in accordance with the stipulations of the communitarian rights (articles 81 and 88 from the European Community Treaty) which define the competitiveness policies in Europe applicable to all forms of education. (Cristea, 2000)

The phenomenon of transnationalisation of education is pertinent and universities must face the challenge.

The tertiary education globalization is only one aspect of the university activities and it must not be exaggerated or opposed.

On the contrary, the universities have achieved a double role apparently paradoxical: the promotion of the global, universal dimension and at the same time the protection and promotion of the national cultural values.

In almost their entire history the universities had to keep a balance between universal and national since they were by nature institutions with a double perspective.

Based on their past experience, the universities are among the best prepared institutions ready to face the globalization phenomena, including the educational component.

National identity is retained in the context of globalization, the effect in assessment being one of global quality perception (by introducing the internationally spoken languages, the study of informatics) and harmonization of the educational process at the European level.

This paper tried to refer to just a few aspects regarding the role of globalization in the increase of quality from the Romanian university education in the context of its integration in the European structures.

Please cite this article as: Lidia Cristea (2012) Regionalization and Globalization in the Concept of Sustainable Development Education. Danubius. http://danube-cooperation.com/danubius/2012/08/06/regionalization-and-globalization-in-the-concept-of-sustainable-development-education/
↑