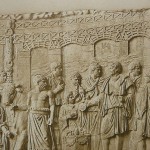 The Djerdap, or Iron Gate region encompasses the banks of the Danube from Golubac (Roman Cuppae) to the mouth of the river Timok (Roman Timacus) with its immediate hinterlands. In this region for millions of years the Danube cut its way through the rocky massif of the Transylvanian Carpathians, forming not only the largest but also one of the most beautiful river gorges in Europe. Between the river and the mountains of Homolje, Miroc, and Deli Jovan on its south bank, the space available for human habitation is very limited. In some parts of the Danube gorge, there are many submerged reefs, rapids and cataracts, while in the Great and Small Gorges in the middle of the canyon, the Danube is the deepest river in Europe. In antiquity the river often froze during severe winters, making crossings very easy during those periods. From the end of the Gorge, at the Roman castellum Diana, to the mouth of the Timok river, the Danube again becomes a broad and smooth flowing stream with numerous islands and sandbars. Inland from its banks, endless plains, fields, and forests spread. in this Iron Gate region, which is some 120 Roman miles long, some of the oldest cultures connected with the origins of European civilization developed. The river also separated two worlds which, most of the time from the prehistoric period to the Middle Ages, were in opposition to one another. From the north side of the river arose problems and threats to the peoples occupying the south bank, and it also happened that it was on this stretch of the river that the Roman empire steadfastly defended the integrity of its borders for four long centuries.