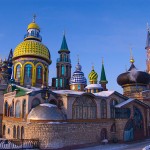 Inter–religious cooperation considers common religious efforts and activities in solving various interdisciplinary problems. It is possible at least to indicate its theological, social, political and anthropological aspect. Theoretically and methodologically the concept is generally based on “unity of diversity” formula as an civilizational objective. One of the starting premises is to enrich dominant secular goals and approaches of the EU and states through promotion equal status of religious communities within civil society, despite strong presence and influence of states.