The Danube is the most important river in Europe and is the European Transport Corridor 7, an integral part of the trans-European navigation system Danube-Main-Rhine. Its total length is 3504 km, connecting the Black Sea with the North Sea and linking the West and East of Europe. The Danube flows through Serbia at a length of 588 kilometers, from Bezdan to Prahovo. The Danube is navigable throughout its course, whilst in Serbia its tributaries are Drava, Tisa, Sava, Tamiš, Velika Morava, Timok and Nera. Taking into consideration the significance of Danube’s impact on Serbia’s economic development, we have recognized ten major economic contribution of the Danube for the development of Serbia in the fields of transport, renewable energy, usable water for drinking, irrigation and industry, development of fisheries and fishing, shipyards, increasing sources of raw materials, waste water treatment, increasing tourism potential, development of recreation and sport infrastructure.

Serbia has a relatively low supply of its own water resources, but there are large amounts of transit waters flowing into Serbia, which are largely brought into its territory by the Danube river. This accentuates the need for its rational and multipurpose usage and consumption in order to reach comprehensive economic and social development goals. The following overview of the main economic contributions of the Danube in Serbia should serve to verify and promote the existing economic benefits of the Danube river for the development of Serbia.

Significant economic savings result from the high profitability and low costs of river transport in terms of reduced fuel consumption. Inland waterway transport only consumes 17% of the fuel compared to road transport and 50% in relation to the rail transport for the same mileage, this is an indication of its cost-effectiveness . River traffic, as the cheapest form of transport, is very developed in Europe. In this form the Danube significantly contributes to the developing internal and international trade links of Serbia, connecting the Black Sea to the North Sea through the Danube-Main-Rhine canal.

Transportation on the Danube is also a safer mode of transportation, avoiding damage to transported goods from poor roads or road vibrations, making it particularly favorable for the transport of sensitive or dangerous goods. Further advantages include easier and cheaper transport of heavy and bulk cargo, more predictable schedules, less manpower needed and lower maintenance costs.The most important ports in Serbia for the transport of goods are in Belgrade, Pancevo, Smederevo and Prahovo. 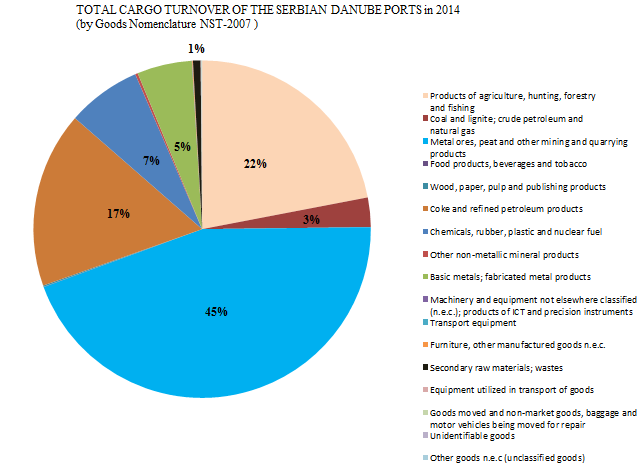 Danube contributes to decongestion of the overloaded road networks in densely populated regions, helps to relieve the transport bottlenecks and improves ease of travel stimulating other sectors of the economy. The total number of passengers transported on the Danube in 2015 was 74,000.

Two hydroelectric power plants are located on the Danube river in Serbia, Djerdap 1 producing 1026MW and Djerdap 2 producing 270 MW, together they make up the system Djerdap the largest producer of hydro-power in Southeast Europe.

In the case of Serbia hydroelectricity produced on the Danube, by the system Djerdap, satisfies 22% of Serbia’s national electricity needs. The total installed capacity of power plants in the composition of The Electric Power Industry of Serbia is 8364 MW or 7190 MW without the thermal power plants in the territory of the Autonomous Province of Kosovo and Metohija. The total power hydroelectric power plants Djerdap 1 and Djerdap 2 is 1,296 KW. Therefore, the Djerdap hydroelectric system constitutes 18 percent of the total power potential of Serbia and 54 percent of the total hydro-power potential of the Republic of Serbia.

In Serbia there are about one million inhabitants (920,716) in 2,410 local government units that have direct access to the river Danube, which constitutes about 13% of the total population of Serbia. The water that is needed to supply the population, artificial lakes, fisheries, industry and agriculture is mostly taken from the river Danube and the Danube-Tisa-Danube canal (DTD).

Of the total arable land in Serbia about 3.6 million ha is suitable for irrigation, of which 60% is located within the catchment area of the Danube river.

The Danube-Tisa-Danube is a unique system of canals used as protection against flooding and to irrigate the land. It spans over 12,700 square kilometers, between the rivers Danube and Tisa in Vojvodina. The canal network DTD allows for the drying of about 700,000 ha of land and the irrigation of 50,000 ha.

The development of fisheries in Serbia takes place in natural aquatic ecosystems – running waters and in artificial aquatic ecosystems. The Danube water is used for commercial and sports fishing, and significant areas are intended for carp fisheries. All running water in Serbia is arranged into fishing areas (RP). Only the largest rivers have separate RP. The Danube has four RP, with a total area of 4450 ha suitable for the construction of fisheries.The total registered catch of fish in the rivers, lakes and canals of Serbia amounted to 3,150 tonnes in 2015, while the total fish production from fisheries amounted to 15,000 tonnes.

Danube is also a source for the cheapest essential building material – sand. “Dunavac” is a type of sand that is removed from the river bed of the Danube and can be used for concrete work, plastering walls and for filling in the terrain. It is excellent for setting up water pipes and creating high-quality mortar. “Dunavac” can also be added to the land intended for planting because of its ability to retain moisture contributes to better growth of all plants. Gravel is also obtained from the exploitation of the Danube river bed and used for concreting of large areas, creating columns, slabs, stairs, foundations, fences …

The discovery of lignite deposits at the bottom of the Danube near Kovin represents a unique example in the world, where for the first time the technology of underwater lignite exploitation is applied. Underwater Lignite exploitation in Kovin started in 1992 and so far more than 200,000 tonnes of commercial lignite are extracted annually.

Serbian shipbuilding was once one of the main export pillars of the entire economy, with annual foreign exchange earnings up to $ 300 million. According to data from the Chamber of Commerce of Serbia from 1954 about 4,000 ships were built in Serbia, of which 85 percent were exported to 25 countries, on four continents. Despite the overall political and economic crisis in Serbia some shipyards survived with the help of foreign investment and contracts, such as the Dutch company Vahali Zasavica in Sremska Mitrovica, which is one of the leading builders of river ships in Europe. Dutch company decided to do business in Serbia primarily because of the quality and expertise of the local manpower, a favorable geographical position on the Sava and Danube rivers, and also because of the low cost of utilities, energy, labor and subsidies.

Belgrade is the only capital city in Europe that has no treatment plant for wastewater. Every second at forty different locations the city releases nine cubic meters of municipal waste water. Belgrade discharges all wastewater directly into the Danube and Sava rivers. The situation is similar in other cities in Serbia, for example, the city of Novi Sad has no municipal wastewater treatment plant and all of its wastewater is discharged untreated directly into the Danube. The only obstacle to large-scale ecological catastrophe in Serbia is the river Danube with its huge capacity for self-purification, which prevents major ecological and health consequences of irresponsible attitude towards environmental protection.

The Danube is the foundation for the development of sports and recreational centers in Serbia, both along the Danube River and at artificial lakes such as “Srebrno jezero”. Sport activities that are encouraged and enabled by the Danube include water sports: swimming, kayaking, sailing and sports fishing. Rowing courses on the Danube allow for the holding of all domestic and international rank competitions, which significantly contribute to the success of Serbian kayakers at the Olympic Games.

Sport and recreational facilities such as running and bicycle paths along the Danube have a important health and social significance for the population living in highly urbanized areas, by raising the level of psychological and physical health of the population, increasing labor productivity and thus contributing to long-term economic sustainability. Also, these facilities provide new employment opportunities through the development of complementary and related activities and various services that generate additional incomes.

The whole flow of the Danube through Serbia abounds in extremely beautiful panoramic vistas and places that offer natural treasures, rich culture, historical heritage, natural beauty, gastronomy, all of which favor the development of tourism. The Danube passes through the picturesque Vojvodina plains and national parks “Fruška gora” and “Djerdap”. Significant tourism potential is the proximity to archaeological sites. Some of them are: Neolithic – “Starčevo”, Vinča, Lepenski vir; Roman – The Roman road on Djerdap, Viminacium, Trajan’s memorial plaque (“Tabula Traiana”) and many Roman forts. Cruising through Serbia offers unforgettable views of the Petrovaradin fortress, Belgrade, Smederevo and Golubac fortress, which is considered by many to be the most beautiful medieval fortress on the entire Danube.

Nautical infrastructure (docks, marinas, tourist attractions) contributes to the quality of the Serbian tourism offer and visitor numbers. The Danube is the most popular river in the world for river cruises, as well as a great tourist potential of Serbia, with the two largest urban centers in Serbia on its coast – Belgrade and Novi Sad.

Nautical tourism products, besides river cruising, include the use of all facilities of nautical infrastructure and complementary products and services for tourism (marinas, ports and berths, accommodation, food, entertainment, culture). Passengers on riverboats and cyclists are a significant tourist target groups. Data shows that about 100,000 tourists visit Serbia by navigation on the Danube every year.