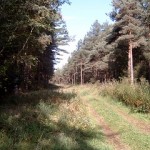 European forests will also be seriously challenged by climate change. Maintaining healthy, well managed forests are essential not only in tropical countries but in Europe too: they are home to thousands of species, and protect soils and watersheds from erosion. They act as carbon stores, absorbing greenhouse gases and preventing their release into the atmosphere. The natural area of several European tree species will be likely to shift as a response to climate change, and therefore there will probably be changes in species composition of many forests. Migration of species will be enhanced; however it is often difficult due to intensive forest management as well as natural and anthropogenic barriers. The resilience and adaptation capacity of forests against climate change largely depends on their natural dynamics as well as biological (i.e. diversity of micro-habitats, species and genetic variables within species) and structural diversity (i.e. age distribution of trees as well as mosaic-structures with large trees, openings, young groups, deadwood and in certain habitat types, patches of grasslands and wetlands).