Editor’s note: this paper was presented at the DaNet Conference held in Budapest from December 12 to 14, 2012.

PULS methodology was developed by EDA Development Agency (Banja Luka, BiH) under the initiative of enhancing efficiency of local authorities in Bosnia and Herzegovina in the provision of public services. The initiative was launched by the Open Society Foundation in collaboration with civil society organizations and Centre for promotion of civil society. It addresses quality of public services with the aim to advance implementation of local democracy and improve socio-economic status of people living in Srebrenik. ((Srebrenik is located in north-eastern BiH, administratively regulated in Tuzla Canton. Municipality covers an area of 248 km2. GDP per capita is among the lowest in Tuzla Canton and significantly below cantonal average. Registered unemployment rate is extremely high – in 2009 it was 61%. Municipality adopted a spatial plan for the period 1998-2015.))

Project activities were conducted in the period January 2012 – October 2012. Stakeholders, citizens, local government officials and CSO representatives from Tuzla Canton were brought together to take part in public debates and round tables in order to share perspectives, solicit response from society, discuss integration of data into decision process and evaluate improvement programs offered by political representatives in the pre-election period.

Research methodology implies that CSOs initially build capacity for application of PULS methodology and that they conduct field (household) surveys in all local communes (Bos. Mjesne zajednice or MZ) in the municipality ((Handbook for civil society organisations in the application of PULS methodology. www.edapedija.net)) according to predefined pattern. The analysis and processing of data is the basis for drafting of improvement plan in the future. Given the availability of information (we used an assessment/classification by type), lack of sampling frame and cost-effectiveness, project used a sample that is not based on probability i.e. customized cluster sample. ((Following data was used: population is 44,955, number of households is 11,555, survey sample size is 645. Source: Srebrenik municipality, Department of administrative and communal affairs, 2011. http://srebrenik.ba/index.php?option=com_content&task=blogsection&id=6&Itemid=59)) Clusters in this case were local communities (Bos.MZ).

General findings from the report

It was planned to examine opinions collected from 645 households. This was achieved in a timely manner. Survey pattern was formed on the basis of statistical data for Srebrenik municipality: 44,955 citizens and 11,155 households. Based on gender, in a total of 645 households surveyed, male respondents were represented with 53.91%, and females with 46.09% (Figure 1). 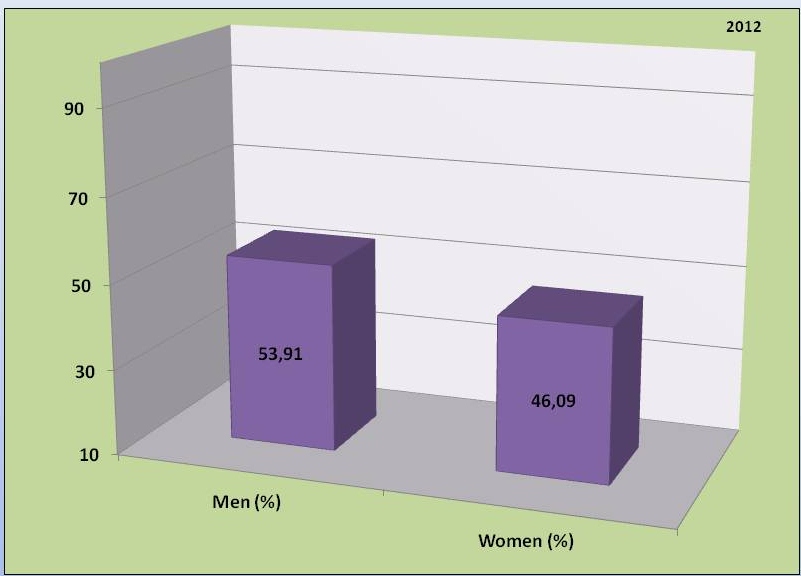 Research results in relation to the age of respondents (taking into account those who declared data related to age) show the following (Figure 2): 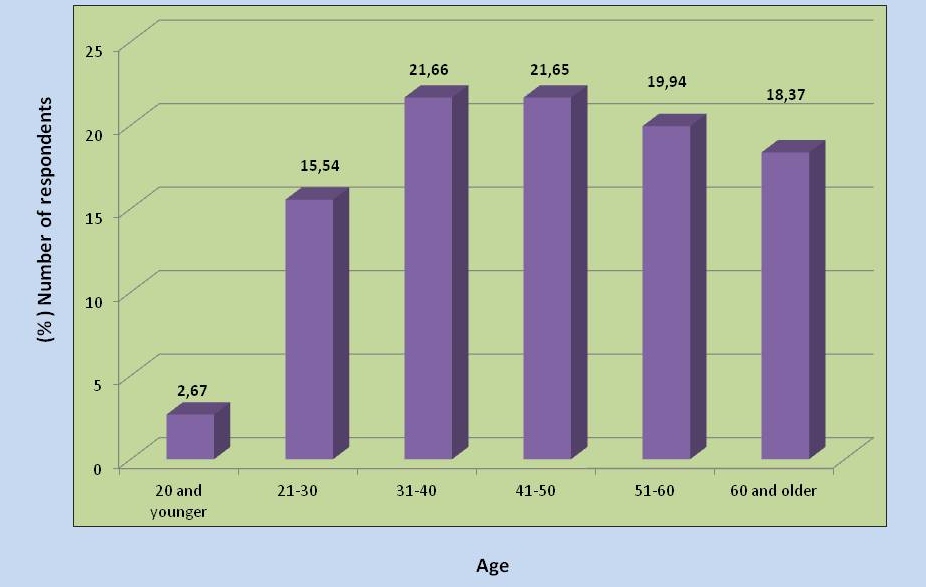 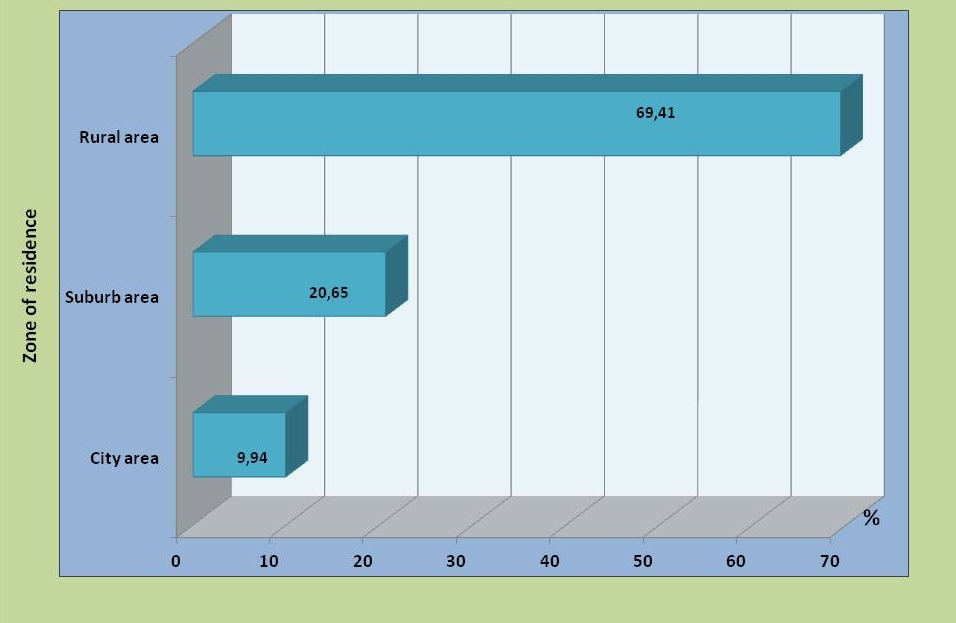 According to the results of research in relation to formal education, there were 36.68% respondents who completed primary school. High school education was completed by 369 persons (or 57,84%). College degree and higher educational attainment was acquired by 34 respondents or 5.33% of the total. Only one respondent characterized his education as a category “Other” which makes 0.16% (Figure 4).

Figure 4 – Characteristics of respondents depending on formal education (n=645)

Interpretation of results from the report

Water supply service quality has lot of dimensions such as: pressure, regularity, quality, degree of responsiveness of service providers to customer complaints etc. We examined the following characteristics of waterworks and sewerage system in the survey:

In terms of water resources in Srebrenik municipality, drinking water supply and sanitary water for households and industry is organized through 70 local water systems for about 80% of the population needs. Only 20 of them have significant and defined abundance of water sources and assessed possibility for long-term supply. Thermal mineral water is identified as a potential resource during hydro geological investigations conducted in 1982 and 1983. However, confirmation and utilization of this resource (which can be a significant component of municipal development) requires further research.

Water supply is provided through major local water systems: Špionica Ormanica, Duboki Potok, Tinja, Čekanići, Falešići, Brnjičani, Podorašje, Straža and Kuge. They are all managed by Public enterprise “Water Supply and Sewage” Srebrenik. Wastewater from settlements is connected through sewer and collector network to a waste water treatment facility north of the town. Current capacity of the unit is 12,000 PE, with planned expansion to 18,000 PE (population equivalent). Drainage of waste water in the urban area covers 70% of users.

Industry is not adequately connected to the system for wastewater treatment. The main capacity of used and useful waters in the town is Tinja river. During dry periods it has very low water levels (negligible low flow-water). It is classified as Category II watercourse. The essential concern and problem relates to receiving untreated polluted water in villages upstream of Srebrenik (Duboki Potok, Tinja, Podorašje) and downstream of Špionica settlement. 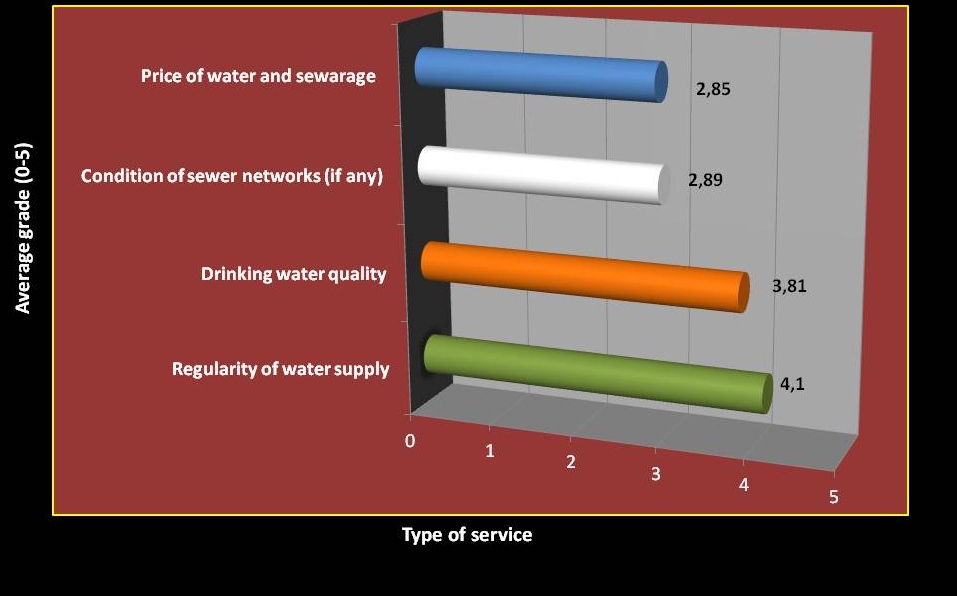 Citizens are partially satisfied with the quality of this public service (Figure 5). The average rate for the regularity of water supply is 4.10. The lowest average rate is given to price of water and sewerage – 2.85, (meaning it does not satisfy or partially satisfies). General remarks were made among citizens who are dissatisfied with high cost of drinking water (Table 1). According to data provided by the Department of administrative affairs of Srebrenik which is in charge of local communities, the average price of 1m3 of water is 1.18 KM (0,60 EUR).

The average rate for the overall water quality is 3.8. This means the citizens are partially satisfied with this service (Figure 5). Attention was referred to high level of lime particles in the drinking water in the majority of local communities. There are 373 kilometres of water supply network and 35 kilometres of sewer network in the municipality, 8400 consumers (households) from the public water supply system, 4237 households with access to sewers. The percentage of water losses is 29%.

In this category we investigated following characteristics related to this service (Table 2): 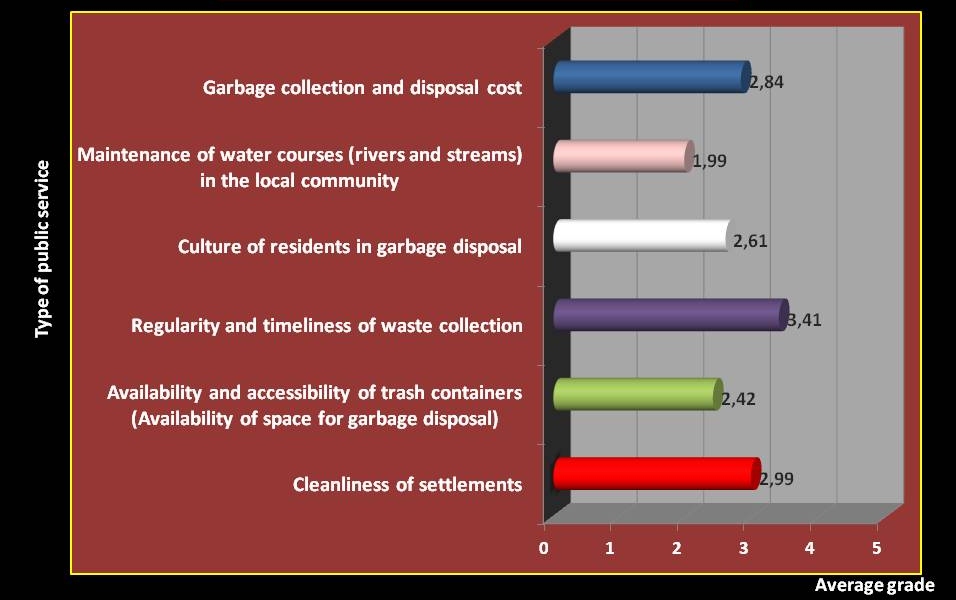 Figure 6 – Average scores of communal hygiene services for all users

Satisfaction of citizens with delivery of this public service is generally low, according to a survey of 645 users. Citizens are unsatisfied with cleanliness in local communities, availability of containers and trash bins, removal of garbage, timeliness of service, etc. (Figure 6). The best rated service is “regularity and timeliness in removal of trash” – 3.41. Average rating for service “cleanliness” is 2.99 (between unsatisfactory and partially satisfactory). The lowest average rating of 1.99 (unsatisfactory) is for “maintenance of waterways” (Figure 6). Citizens expressed criticism in regards to environmental culture and awareness of other citizens and the fact there is no system in place for sanction enforced by the authorities. According to them, there is a lack of available space for waste disposal, which is why the refuse ends up in the river bed. This service has an average rating of 2.42 (it does not satisfy).

According to officially provided information from the local government department, there are 6570 service users for garbage and waste collection. The amount of waste generated and collected on a yearly basis is 50.000 m3. There are 37 local communes covered by organized waste collection and 26 containers for waste collection.

Average price for waste disposal per unit of measurement is 0,087 KM/m2 or 6 KM/month (3.067 EUR/month). In terms of billing performance, collection percentage overall is 82%. In terms of solid waste management, separation and sorting of waste is not solved adequately. Decision on communal order (Official Gazette of Srebrenik no. 6/06), carries the obligation to include all households and legal entities in the system of organized collection and disposal of solid waste. There are also obligations of municipal companies as service providers to expand coverage over entire area of Srebrenik. Collection, transportation and disposal of solid waste is organized by the Public enterprise “9th September” and it covers almost entire municipality.

Maintenance of local streets and roads, horizontal and vertical signalization 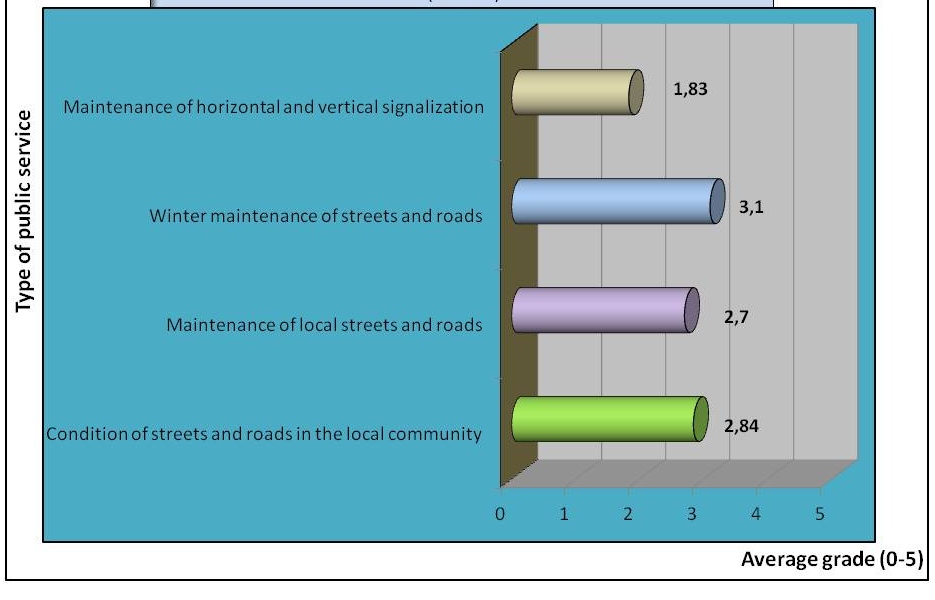 Road communication in Srebrenik was developed in part related to the: main roads (25 km), regional roads (28 km), local (89 km) and under category roads (218 km). 33.5% of unclassified roads is unpaved. In the category of local roads 97.8% is unpaved. The length of non-categorized streets and roads in total is 218 km, and of unpaved is 143 km. Concern about safety was an an issue among passengers and drivers in certain rural localities (Gornji Hrgovi).

Our research has shown that citizens were largely dissatisfied with this public service (Figure 7). Average grades range between 1.83 and 3.10. Average rate for the state of local streets and roads, and the maintenance of signalling was 2.8. It indicates low level of citizen satisfaction and the need to work on improvement of this public service. The average for maintaining streets and roads is 2.7. The winter road maintenance services obtained the best evaluation: 3.10. Maintenance of horizontal and vertical traffic signage was rated with 1.83 Figure 7).

We were not able to get information about the amount of funds from the budget that was invested in the rehabilitation and construction of roads, regular maintenance, maintenance of HVS. However, if we look into the overview analysis of the main economic activities in Srebrenik it is indicative that transport, storage and communication have a very high concentration of employment. This concentration is 3.2 times higher than the average concentration of employment in this sector in the Federation of Bosnia and Herzegovina.

In the table below are two main characteristics we looked into while examining quality of street lighting (Table 4): 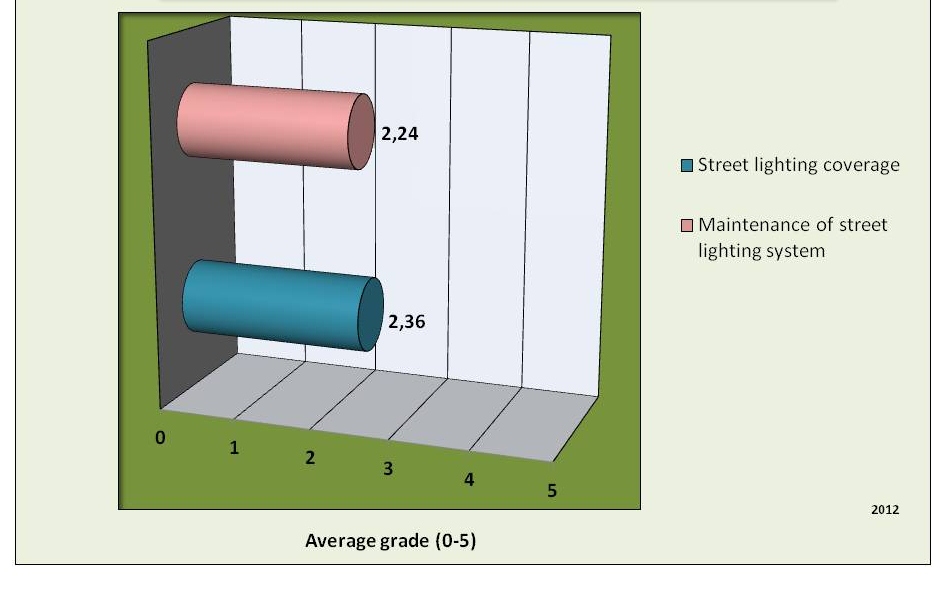 The estimated percentage of coverage in the local communities with municipal public lighting is 70%. In recent years, around 600,000 KM (306,775.12 EUR) was invested in functioning of lighting from the government budget.

Soliciting the feedback of citizens on quality and performance of public service demands time, technical and financial means. We have witnessed this throughout months of implementation. The implementor, the Association for development, advancement and promotion of ecological agriculture, tourism and environment protection (EKOPOT) was not only faced with stakeholder and public skepticism (not to name it resistance) to provide feedback, but with a diversity of issues facing Srebrenik municipality in a time of limited financial resources.

Insufficient information sharing hampers involvement of citizens in communal affairs, local projects, local sustainability and resilience. This needs to be improved. The first step is collaborative development that will minimize costs and maximize social and economic benefits for citizens of Srebrenik.

All local communes have their own statutes, the President and the Council of the commune which holds meeting at least once a month. Presidents of all local communities meet twice a year. Thirty-nine local communities in Srebrenik are partly financed from the municipal budget, while the remaining funds are generally earmarked for capital investments allocated by Tuzla Canton. With donors, Canton also allocates certain funds for environmental purposes and environmental projects (mainly run by the civil society organizations).

Funding local communities is at times performed without clearly defined criteria (i.e. based on the activities of some local communities and the willingness of citizens to financially support the implementation of specific projects). It is utterly important to comprehensively realize goals in local administrations and involve ordinary citizens over a long-time period.

The authors acknowledge financial support from the Centre for promotion of civil society (CPCD) and the Open Society Foundation.

Handbook for civil society organisations (CSOs) in the application of PULS methodology. How to achieve more accountable local governments? For more information see: www.edapedija.net or edabl.org.