Editor’s note: This article is the abstract of the presentation given at the 24th Conference “Danube – River of Cooperation”, held on September 24 2013 in Belgrade.

Sacral architecture can be a powerful political tool. If we consider the architecture of pro-ethnocentricity – that is to say architecture ‘for‘ – it is: big, remarkable, breathtaking, and visible from everywhere for everybody. On the other hand, architecture of anti-multiethnicity, or architecture ‘against‘ – is rather small, allowing it to pass unnoticed.

The former of these two phenomena gives us the world’s largest Orthodox Church. The nation is observing self-development, building the temple it is actually building itself striving toward never achievable perfection. The latter, although physically small, and finished in a day, represents territorially the size of a country. How big is ‘big’ – how big is ‘small’ – and what constitutes the size of a country?

When we were children at the beginning of the 80s, and by starting primary school we became Tito’s pioneers – the park around the temple used to be called park in front of The National Library. All pedestrian paths were intersecting at the centre. In the 90s new students were no longer becoming pioneers. Celebrated political project – Yugoslavia – failed and fall apart; brotherhood and unity among nations and religions were changed for nationalism. Belgrade skyline was finally finished, adorned with the most magnificent dome in the territory of Eastern Orthodox Church. At the begging the territory implied verticality but after first conquering the horizon, the temple finally grows in plan, rearranging the network of pedestrian paths. Three main accesses to the park lead directly to the temple; the library is a little bit sidelined nowadays due to very long refurbishment prolonged many times caused by lack of financing. The parish home is built opposite of the library, nearby the temple, as will be the new patriarchal building. Part of the park green area surface is paved in a circle, in order to serve religious act of burning Christmas fire. Additionally the Temple is fenced with a combination of vertical, columns covered with the same stone as the façade, and horizontal elements, bushes.

One of the most prominent features of The Temple is constant and eternal progress. In this moment, the year 2014, work on the interior is still in the progress, and will run for the next 8 years. And there is always more. Detailed Regulation Plan for this area is based on the winning competition entry for Saint Sava Plateau from 1988. The winning competition entry suggests: closing of two adjacent streets, demolition of existing neighbouring buildings, paving of the entire plateau in front of The Temple which then smoothly in form of terraces continues to descend over the slopes of the hill. Current plan is closing one of these two streets, as well as construction of the Patriarchate building in the near future.

The latest project is to move Nikola Tesla’s remains from the museum to the plateau in front of The Temple. A reinvention of the national identity is still taking place, using increasingly more sophisticated strategies as time goes by, employing the potent combination of religion featuring science with a refine forensic twist.

Serbia is officially a secular country, which means that the policy, i.e. governance and formal power are separated from church. Despite this, politicians from highest level of the government are always present at the meetings of the Society for the Construction of the Temple, since this is a national project. Beside being the president of the Society, Tomislav Nikolić, current president of the Republic of Serbia, is building a church on his personal land. 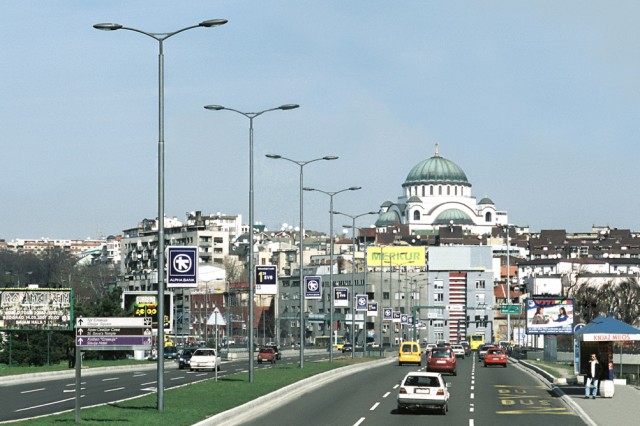 View of the Cathedral of Saint Sava in Belgrade. Source: minel-schreder.rs

“In 2005, a helicopter belonging to the army of the former Yugoslavia carried an unlikely object: a small Serbian Orthodox church, built in metal at a harbour shipyard in Montenegro. The church was manufactured, pre-assembled, and welded in painted steel in the form of small chapel with a single nave and a miniature dome. After a short helicopter ride, the metal church was delivered to its destination; a mountain site marking a disputed border claimed by the both Serbian Orthodox and Montenegrin Orthodox religious aspirations.” ((Aaron Levy, Katherine Carl, Srdjan Jovanovic Weiss, Evasions of Power: On the Architecture of Adjustment, Published by Slought Foundation, 2011, ISBN: 9780981540948.))

The Rumija Mountain is a site of great religious significance. The Cross of Jovan Vladimir is carried every year on the Feast of Pentecost from the village of Velji Mikulići to the summit of Rumija. Traditionally, in addition to Orthodox Christians of Bar area, Catholics and Muslims also take part in the procession and ascent to Rumija summit.

In 2005, Serbian Orthodox Church mounted a metal church building to the summit, by means of Air Force of Serbia and Montenegro helicopter. This was a highly controversial issue, as building of the church was not approved by Montenegrin authorities.

The use of the Air Force helicopter was perceived by some as a provocation in the wake of Montenegrin independence referendum. As of 2011, the church is still standing. Although the case is well known in Montenegro, and even came to Brussels where the status of Montenegro’s EU integration is going to be discussed, in Serbia public is not familiar with that. The majority of the Committee on Foreign Affairs (AFET) of the European Parliament members rejected an amendment filed by a Slovenian MEP, Jelko Kacin, which advocates demolition of the church on Mountain Rumija and condemns statements issued by Serbian Orthodox Church [SPC] dignitaries. According to official announcement released following the session of the committee, 31 MEPs voted against Kacin’s amendment, 30 MEPs voted in its favor, whereas 3 MEPs abstained from voting. ((Dunja Predic, How big is all that, really?, http://criticalspatialpractice.org/wp-content/uploads/2013/02/CSP_Cultures_Of_Assembly_Newspaper_2012.pdf)) 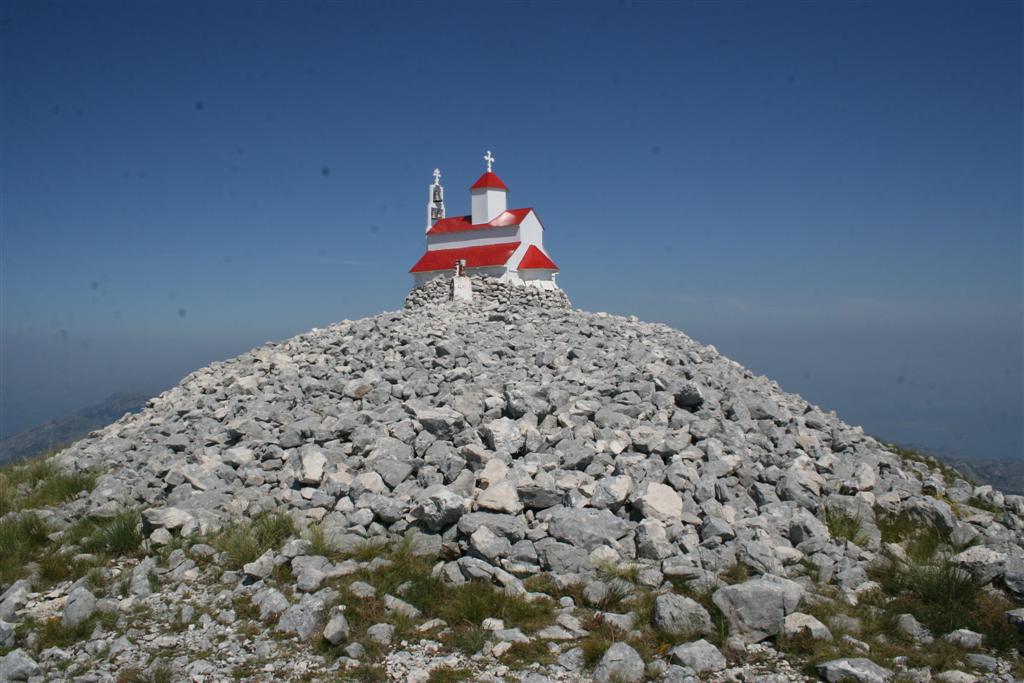 The Big Church is 7 centuries old dream. It is being built for almost 100 years, 70 meters tall, floor area to accommodate 10 000 faithful at any time, 49 bells, and 12 m high gold plated crosses visible from all the approaches to the city. It is not finished yet. This building epitomizes eternal desire, never accomplished because it is trying to reach: unobtainable, a dream, the cure for lost, confounded national identity. It became a national project, already few times abandon tower of Babel but after each derelict it grows higher and closer to the sky. Nation is observing self-development, through the building of the temple it is building itself striving toward never achievable perfection.

The Small one is like the move in chess. It is built in one day with employment of Air Force of Serbia and Montenegro helicopter. In 2005, Serbian Orthodox Church mounted a metal church building on the top of the Mountain – a site of great religious significance. The Cross is carried every year to the summit of the Mountain. Multiethnicity is what distinguishes this location from other locations of the pilgrimage; together with Orthodox Christians of Bar area, Catholics and Muslims would also take part in the procession and ascent to Rumija summit.