this is part 2 of the last weeks article

The establishment of the Stability Pact for South-Eastern Europe (SP) in 1999, provided a solid basis for the cooperation in the region. Mutual negotiations of the Sava countries, conducted under the auspices of the SP, resulted in the signing of the Framework Agreement on the Sava River Basin (FASRB) and the Protocol of Navigation, on December 3rd 2002, in Kranjska Gora (Slovenia), between Republic of Slovenia, Republic of Croatia, Bosnia and Herzegovina and Federal Republic of Yugoslavia (the later State Union of Serbia and Montenegro and than only the Republic of Serbia). The Agreement came into force on 29 December 2004 and was registered at the United Nations on 21 April of 2006. The first meeting of the Parties of the Framework Agreement on the Sava River Basin has held on June 1 of 2007, in Zagreb, and since than these date is celebrated as the Sava Day. The Agreement is a result of the ambitions of the countries to create a solid framework for cross-border cooperation in the Sava River Basin for sustainable development of the region. The concept of Sustainable Development was formally introduced by the United Nation World Commission on Environment and Development (WCED) in its report entitled „Our Common Future“, which was published in 1987. In this report, also known as The Brundtland Report, the sustainable development is defined as

“development that meets the needs of the present without compromising the ability of future generations to meet their own needs. “

World Commission on Environment and Development, Our Common Future: The Bruntland Report

Therefore, the Framework Agreement on the Sava River Basin integrates all aspects of the water resource management in a sustainable way, defining the key objective and the three main goals of the cooperation as shown in Box 1

The cooperation in fulfilling the FASRB objectives is based on the following principles:

In implementation of the FASRB, the Parties cooperate especially with The International Commission for Protection of Danube River – ICPDR, The Danube Commission, The United Nations Economic Commission for Europe- UN/ECE, and with the EU’s institutions. The FASRB is consistent with the Belgrade Danube Convention of 1948 and the Sofia Convention of Cooperation for the Protection and Sustainable Use of the Danube River of 1994.
The implementation of the FASRB is being undertaken by the national institutions, officially nominated by the Parties. According to the Dayton Peace Agreement, Bosnia and Herzegovina is comprised of two entities: the Federation of Bosnia and Herzegovina (FBA) and the Republika Srpska (RS); and Brčko District as a separate administrative unit. The water management, in accordance with the Constitution of the Bosnia and Herzegovina, is under competence of the entity ministries of agriculture, water management and forestry. On the state level, Ministry of Communications and Transport of Bosnia and Herzegovina is responsible for navigation on rivers and sea and the Ministry of Foreign Trade and Economic Relations of BA is in charge of coordination of activities and harmonization of plans between the bodies of the entity governments, as well as for institutions on international level in the field of natural resources, environment protection, agriculture and energy (Figure 4).

From the aspect of the international law, the Framework Agreement on the Sava River Basin represents Pactum de Contrahendo agreement or obligation to conclude other agreements and protocols in order to regulate specific area of cooperation:

For the implementation of the FASRB, the Parties have established the International Sava River Basin Commission ( Sava Commission).

The International Sava River Basin Commission – ISRBC, has been established as the joint institution with legal status of an international organization, for purpose of the implementation of the Framework Agreement on the Sava River Basin. Previous to the establishment of the Sava Commission, the Interim Sava Commission, as temporary joint body, was formed at the Conference of the Interested Party of the Sava Basin Initiative, in organization of the Stability Pact for South-Eastern Europe, held on March 12, 2003 at Brussels. The Interim Sava Commission had provided all steps and pre-conditions necessary for the establishment of the permanent ISRBC.

The First Constitutional Session of the International Sava River Basin Commission was held in June 27, 2005, in Zagreb (Croatia). The ISRBC is an international organization with a legal international capacity and with the Permanent Secretary. The Secretary as its executive and administrative body, started to work on January 09, 2006. The Sava Commission is composed of eight representatives of the four countries (one Member and one Deputy member of each Party), nominated by governments, having one vote in the Commission. The ISRBC is represented by the Chairman. The Chairmanship is rotated every three years, following the English alphabetical order of the Parties. Annex I of the FASRB – Statute of the Sava Commission defines the mandate and responsibilities of the Sava Commission. The ISRBC is financed by regular annual contributions of the Parties and from other sources (i.e.grants of the EC and UNECE for implementation of the projects).

The ISRBC has the capacity for making decision in the field of navigation and providing recommendations on all other issues regarding the implementation of the FASRB. On its session, the Sava Commission, according to the recommendations of the Secretariat, adopts the decisions and the recommendations to the Parties. The decisions adopted by the ISRBC in the field of navigation, with the binding character for all the Parties, have the aim to provide the conditions for safe navigation and conditions for financing the construction of the waterways and their maintenance. 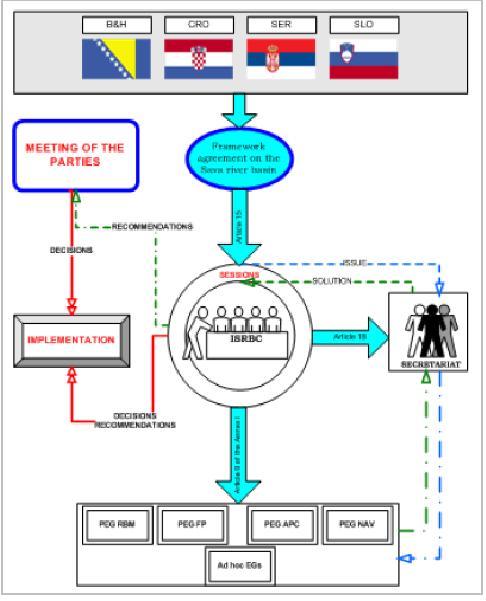 Functioning of the Sava Commission (Source: ISRBC, Strategy on the Implementation of the FASRB,Zagreb, April 2011, p. 10.)

In order to meet its tasks, the Sava Commission coordinates a broad set of activities including:

The International Sava River Basin Commission and the Danube Commission signed The Memorandum of Understanding on Cooperation, on January 29, 2009 at Budapest, aimed to establish mutually beneficial relationship and a better coordination in the field of the navigation on the Danube and Sava River.

Next week: Economic basis for cooperation …